What is a surge protector

What is a surge protector? 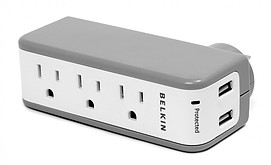 Surge protectors help create a safety net that protects your electronics from a power surge that could damage the plugged in devices.  This means that it is a valuable tool to have for nearly all electronic devices.  While it would be ideal to use a surge protector as much as possible many households only have a couple on hand.  In this scenario we suggest choosing the items you are most worried about losing, as well as those that remain plugged in on a regular basis.  Items such as computers and TV’s are often best connected to a surge protector as they are larger ticket items that may be difficult to replace, and often remain plugged in throughout the day putting them at larger risk of a power surge if there is a power outage.

The majority of surge protectors come in the form of a power bar.  This allows you to still plug multiple devices in while the power bar only takes up one wall outlet.  The key difference being that a surge protector of the appropriate strength will absorb an unwanted electricity surge, for example, when the power goes out and comes back on if your devices are plugged directly into the wall or a normal power bar they may be damaged by the surge of electricity starting back up if they are not plugged into a surge protector.

What to look for when purchasing a surge protector

A few of the most common things that you’re likely to find on surge protector packaging include the joule energy rating, number of spaces available to plug your items into, and a small protection light that confirms the device is functioning as intended.

Simply put, the Joule energy rating tells you how much energy that surge protector is rated to absorb, and that energy is measured in Joules.  Small electronics such as phones and basic printers may be safe with a rating that is around or slightly under a couple thousand joules.  Larger items such as computers, televisions, and gaming consoles are often best with a higher rating for increased safety.  It is also important to consider how many devices you have plugged into your surge protector.  For example, if you have 8 devices plugged in then that not only requires a fair amount of power, but is also a lot of equipment to risk losing and the joule energy rating should be selected accordingly.

Given that most surge protectors come in the form of a power bar it is important to also make sure that you don’t overwhelm the actual power source or outlet.  Fire and heat safety features can be found on many bars but regardless of that feature or automatic shut off you shoulf never plug in more than your elestrical source can safely handle.  For the best protection all not in use devices should be unplugged and as little as possible left running unattended.

Interested in more info? Check out the further reading below: