Are Squirrels Rodents? – Fluffy and Furious

Squirrel – A popular and cute fluffy animal that is commonly seen scurrying around the yard or park and taunting dogs.  While often thought of in a more positive light, squirrels are still considered rodents, just like rats and mice.  Their little squeeky chatter is quite comical and they appear to be incredibly social and active rodents.  Squirrels can be found in many countries around the world and seem to love both farmland and cities alike. 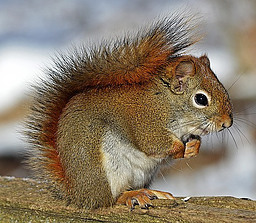 While still truly wildlife, these smart creatures have realized that human civilizations provides a great food source. They have little fear when it comes to snagging something from a garbage bin, underneath a picnic table, or even just running closeby!  They can often be found in backyards, parks, and even among the trees that line sidewalks.  If you’re ever walked a forrested trail with trees overhead you have probably felt the instantanious fear as one jumps between the branches and barely avoids falling down on top of you.  Their ability to climb, jump, and cling on to completely vertical objects is really pretty incredible!  Thankfully, when viewed from afar they are quite entertaining to watch and a beautiful addition to most areas.

Survival of the fittest

These little guys are quick – and they need to be! They are prey to many animals including cats, coyotes, and small terrier dogs alike (Jack Russell’s can hunt like no other)!  Oftentimes it’s not just their speed but also their incredibly strong ability to climb straight up a tree or balance on the very end of a moving branch that saves them from predators.

Are all squirrels alike? 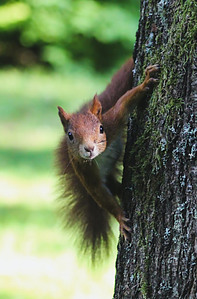 There is great diversity among squirrel species, but most people tend to think of a small but long creature with a big bushy tail ranging in colour from black or brown to various shades of grey.  These quick little creatures are known for climbing trees, eating bird seed, nuts, and snagging the odd vegetable from a home grown garden.  They are generally speaking happy to stay in their own space and cause little direct threat to humans when they remain outside and unthreatened.

If you find that squirrels are moving in (such as to the attic) it is generally best to have a professional remove them and seal any potential entrances.  Just like most animals they need to be able to protect themselves and can become aggressive when threatened.  While fluffy an adorable outside, their teeth can also do a lot of damage inside and they can still carry diseases just like any other rodent.  Safety should always be your top priority when it comes to removing wildlife from your home and each animal varies in the best methods so professional help is always recommended.

If you want to learn more about squirrels head on over and check out the following links:

Don’t forget ot check out some of your other articles too!

What do Hummingbirds eat in the winter?

Do worms have eyes?