What is Pumpkin Spice Coffee

What is pumpkin spice coffee you ask … only one of the most delicious and controversial non-alcoholic drinks out there!

Pumpkin Spice is a symbol of fall for many.  The glorious cooler “sweater weather” that seems to creep earlier every year despite the obvious rejection from many summer lovers.  More than just a drink – pumpkin spice symbolizes the re-appearance of oversized knit sweaters, leggings, stockings, candles and studying for late teen to early thirties females around the globe (and specifically in North America).  In some areas it is even joked that drinking an annual pumpkin spice late is a “basic white girl duty” whether or not it is the favourite warm caffeinated beverage of that individual.  Obviously it is a drink to be enjoyed by all genders, races, ages and humans alike, but for some reason it has been taken on as a true favourite of the previously mentioned group. Hey – you probably don’t even have to be human to enjoy this gem – but please don’t go feeding it to your four (or no) -legged friends without checking with their veterinarian first.

Whether a regular comfort food or only nearby in your nightmares you’re bound to have pumpkin spice experiences this year.

But Why is it so Special?!

Just a latte, like many others – it includes the classic espresso and milk base with a pumpkin spice syrup, some foam on top, and sometimes even a little whipped cream with pumpkin spice, cinnamon, or nutmeg powder added to top it off.  Why this particular drink rose above the ranks of so many others is unknown – but it is undeniable that almost everyone has an opinion on it – good or bad, but rarely neutral. 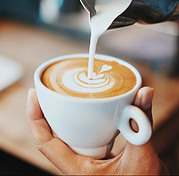 Depending on where you order (or make) your pumpkin spice coffee there can be great variation in the true flavour! Flavoured hot coffee, flavoured iced coffee, flavoured latte or any of the many other varieties available they all fall under the great “Pumpkin Spice” umbrella that emerges each fall!  Impatiently awaited, the arrival creeps earlier each year and is now appearing in August – sometimes even early August while it is still undeniably summer!

It is available on most menus where coffee can be found and almost always disappears once the Christmas drink season takes over.  Tim Hortons, Starbucks, McDonalds, or anywhere else – take your pick and try them all- or none of them to hang on to that rare “I’ve never tried Pumpkin Spice” status that only exist so that you can continue to be able to say you aren’t one to jump on the band wagon.

Dietary restrictions? No problems – we’ve got oat milk, almond milk, gluten free, basically anything you want! Given that the concept of pumpkin spice tends to go along with the ever evolving and inclusive “basic white girl” character traits of the younger generations we can probably even find a suitable allergy/dietary choice friendly pumpkin spice latte for those that can’t have coffee, milk, pumpkin, or spice!  What more could you ask for than a drink that can literally be modified to include none of the main ingredients!

But Why Stop at Beverages?!

A creation so magnificent obviously needed to be made into other forms! Se we introduce to you the ever popular pumpkin spice loaf, timbit, donut, and our personal favourite – the Starbucks Pumpkin Spice Cream Cheese Muffin!  Heck – if you can come up with more edible concoctions please let us know as the list clearly goes on!

Enjoy the upcoming Pumpkin Spice season – whether that be with your dream latte in hand, or hanging on to that classic ice cold summer lemonade!

Looking for some more fun facts to brighten your day and expand your knowledge? Check out our other articles at http://www.commoncuriosities.com.