Where do Polar Bears live now?

Where do Polar Bears live? 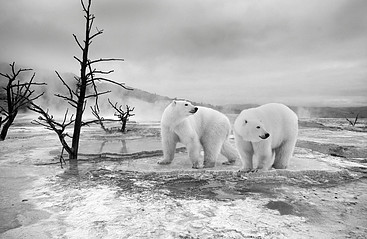 So you’ve seen them in movies and winter clothing wear advertisements but still want to know where do polar bears actually live?!

While it seems logical that they would live in any cold environment polar bears actually only really live in the Arctic (or near the “North Pole”).  They inhabit several countries, but the majority of their population can be found in the northern areas of Canada. They generally require both land and Ice (on a body of water) to survive and hunt.  There are several other bear species that can survive further down into Canada’s more populated land. Some species are often seen up in “cottage country”, but not every bear is the great “polar bear”.  This magnificent beast does not tend to inhabit cottage country.

It isn’t uncommon to see polar bears and penguins in the same movie but they don’t actually tend to cross paths as the Arctic and Antarctic, or North and South Pole, are geographically no where near each other!  Never the less, we enjoy those scenes as much as the next person and hope they continue… you just won’t ever see them on a National Geographic channel.

Check out some of our other articles!