What is a Thagomizer?

What is a Thagomizer?

Quite simply put a thagomizer is the informal name given to the spikes on a dinosaur’s tail.

For a very long time there was no real name for these spikes (typically 4-10 on a dinosaur tail, most notably the stagosaurus). 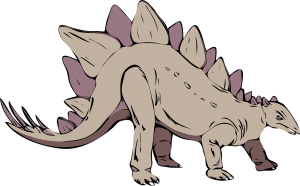 In 1982 that all changed when a cartoonist by the name of Gary Larson published a comic called “Far Side”.  The cartoon contained an image showing both people and dinosaurs together in which students were being taught that the spikes were called a thagomizer – named after the late Thag Simmons, who had supposedly met his match when up against the spikes (which in and of itself is totally inaccurate – humans and dinosaurs have never co-existed).

Despite the inaccurate context and joke the term stuck and has now been adopted by scientists and museums as an anatomial point of reference.

The spikes are thought to have a defensive purpose should the animal be in a fight, however, there is not significant evidence to support this entirely.